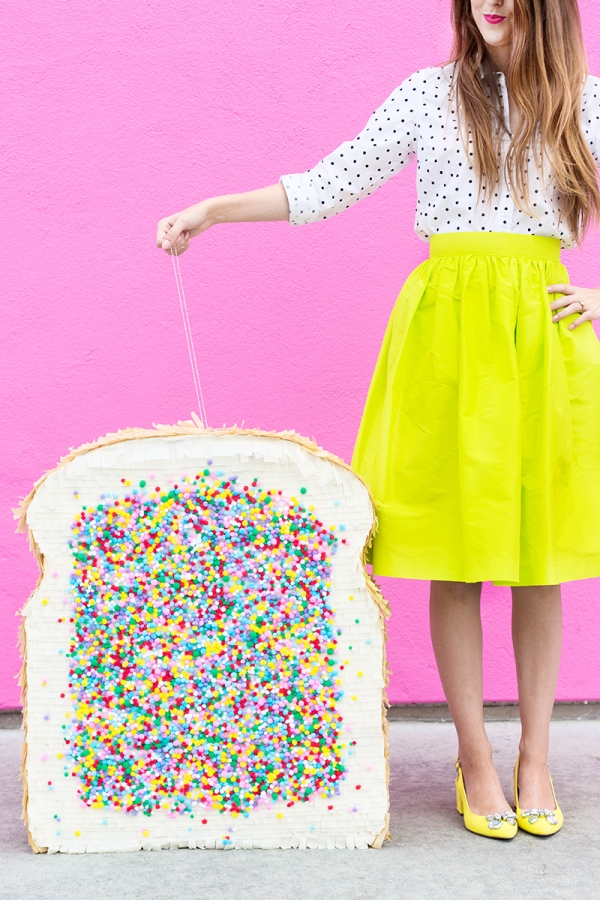 EEE!! I had to squeeze in ONE non-holiday-centric piñata before the Thanksgiving festivities began and this idea has been cooking in my head for quite some time. When I found out about fairy bread, an Australian birthday treat where yes, they put sprinkles on bread (!!!!!!), I almost moved there. But since that seemed impractical, I made this fairy bread piñata instead!!! YAY! 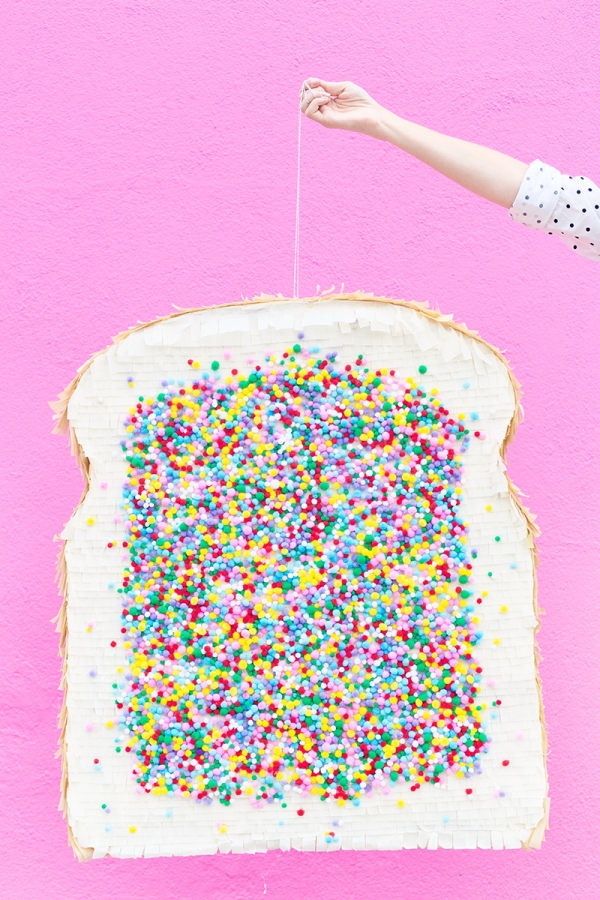 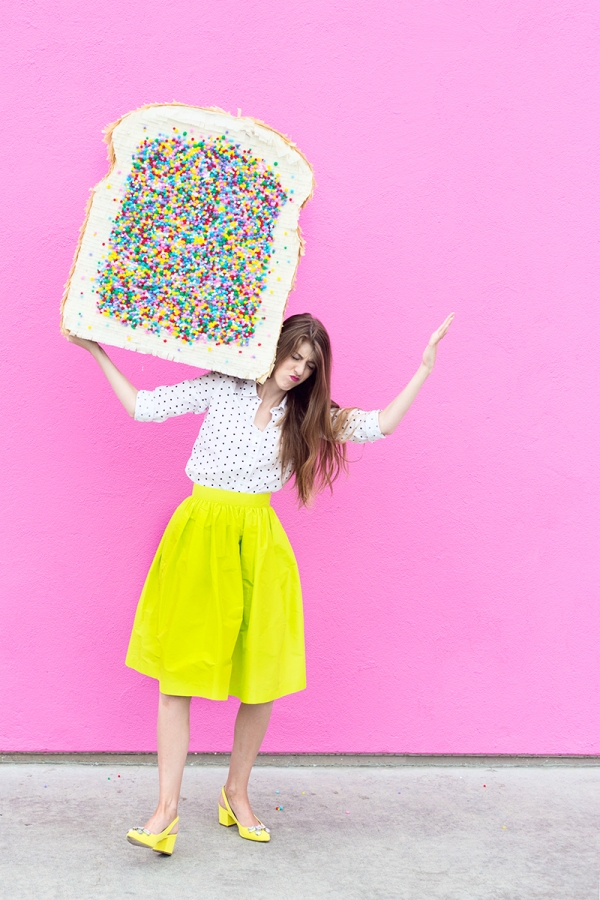 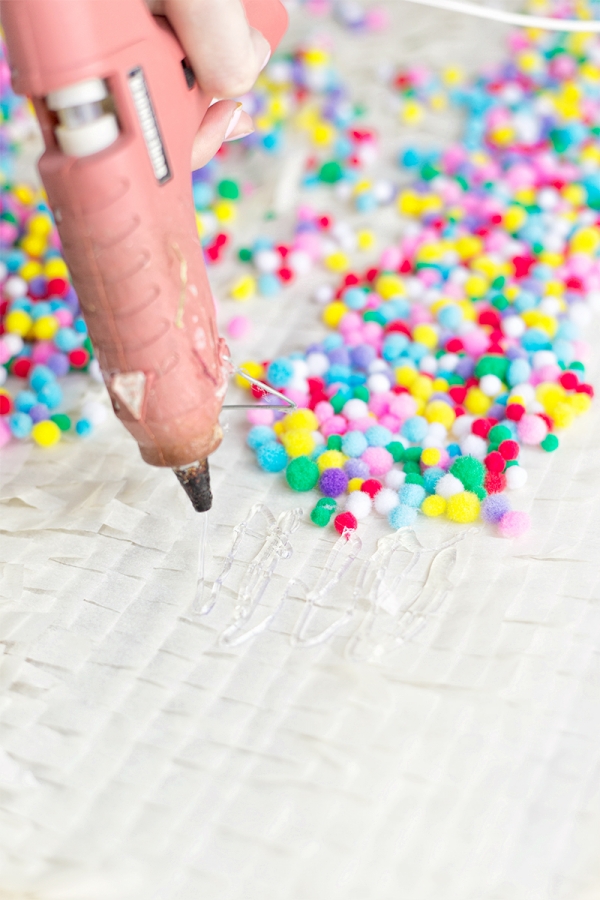 1. Cut out two large bread shapes and several long strips (about 5 inches wide) from the remaining cardboard.
2. To put the piñata together you can follow this detailed tutorial, the steps are exactly the same, just on a larger scale! You’ll need to tape together your piñata, and then cover it in fringe, as instructed in the linked tutorial! While you’re taping the piñata, slip a piece of twine through the top to act as the string to hang it with.
3. Once everything is fringed, it’s time to add pom pom sprinkles! For this, you’ll use a hot glue gun and work in small sections. Start by mixing all your pom poms together to form a rainbow mix. Then start in one bottom corner of the piñata, a couple inches from the edge, and cover a section in hot glue. Immediately dump a handful of pom poms, covering the glue, and press (Carefully! Don’t burn yourself!) to seal them into the glue. Repeat this in small sections, working your away across the bottom and then in rows going up the piñata. I went back afterwards and added a couple stray pom poms so it looked like sprinkles running off the bread! 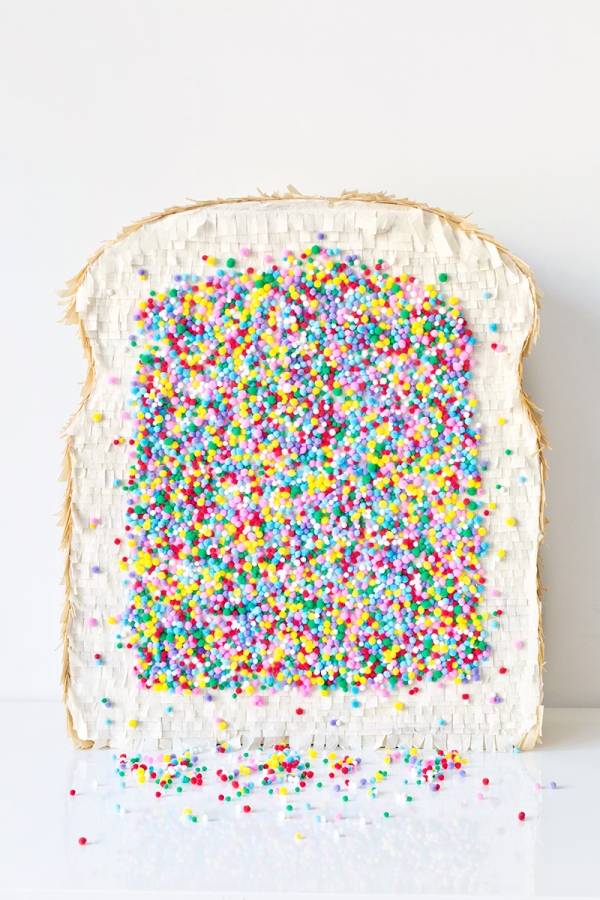 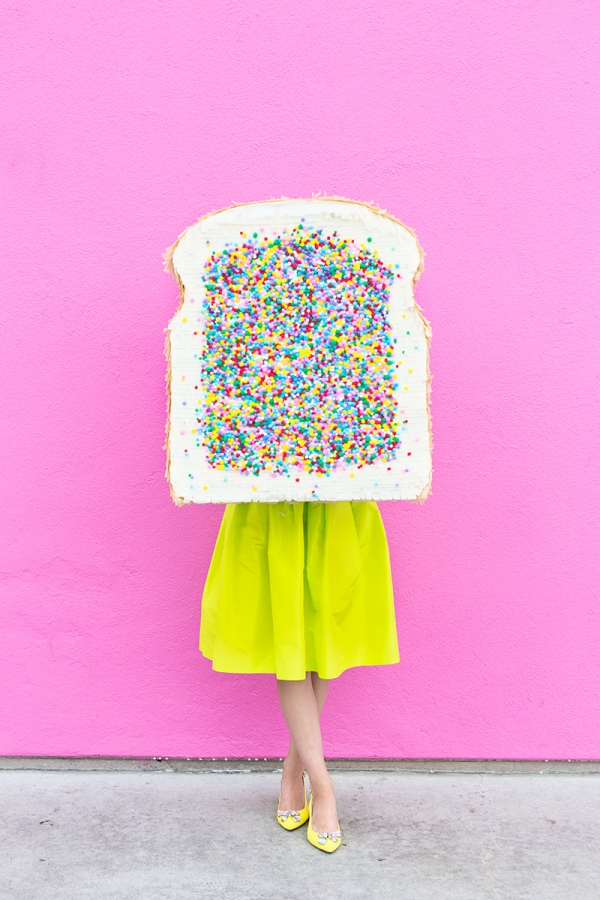 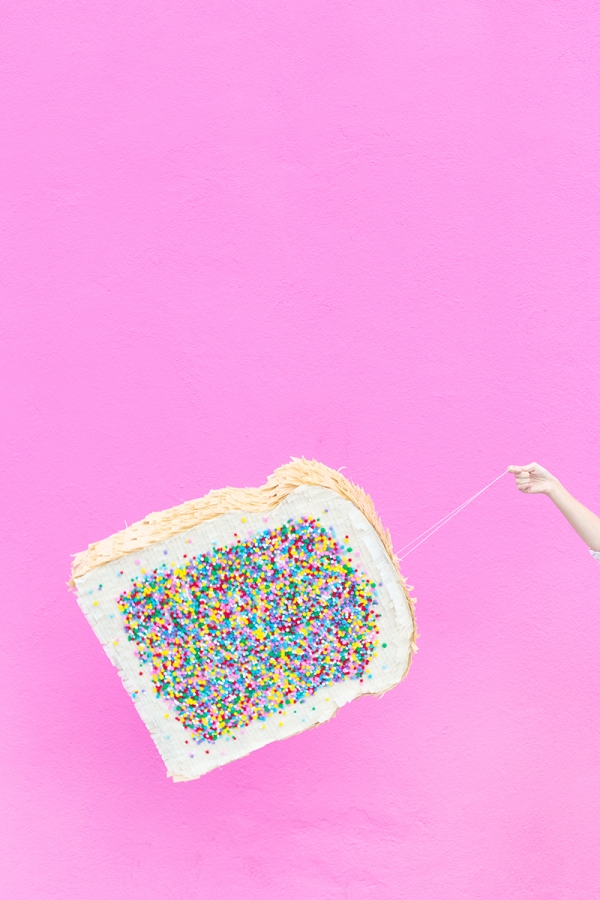 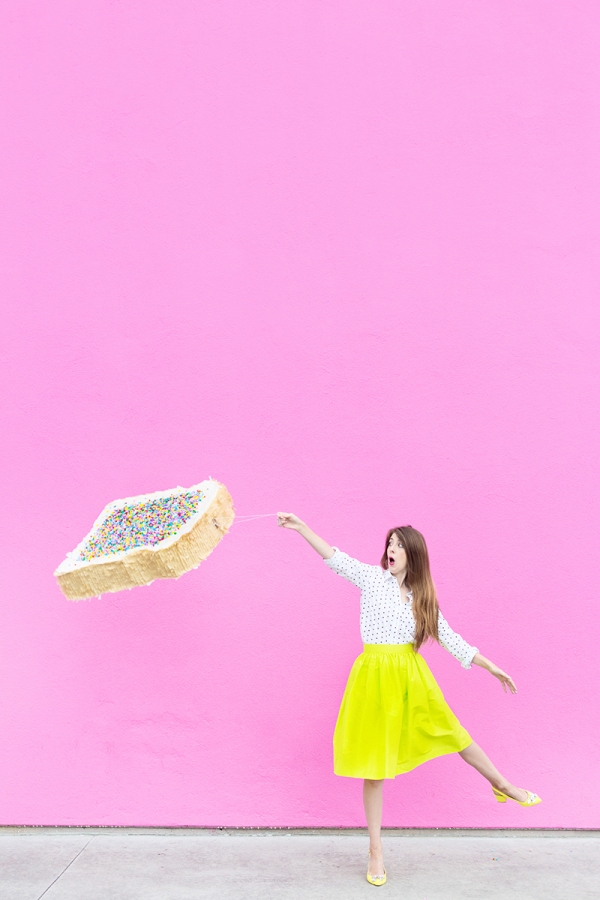 Have you ever tried fairy bread? We don’t have kids yet, but I fully intend to adopt this Australian tradition for ALL their future parties. 😉 Piñata included.

This is super cute!! I may have to adopt the idea for my Dutch boyfriend – sprinkles on bread is a Dutch thing as well – it’s called “hagelslag” and the most common type is chocolate sprinkles. Except it’s not just for kids’ birthdays – adults eat it all the time! It’s a perfectly acceptable lunch! 🙂

Wow I never realized that this was a specific Aussie thing! I have had many a fairy bread fueled party, so much fun. I love the pinata idea it looks amazing

Not just an Aussie thing New Zealand does fairy bread too……. Oh no now Aussies and Kiwis will be fighting over who invented fairy bread not just Pavlova ??

Aussies invented Pav!!! NZ needs to get over it and just accept that Russell Crowe and Pharlap are all they’re ever gonna get credit for ??

This is concurrently the most ridiculous and the most amazing thing I’ve ever seen. So, basically, it’s a 10/10. I will join you in the trek to Australia because clearly I need fairy bread in my life! xoxo

Fairy bread is the bomb! i still eat it now as an adult! and sometimes if mum wasn’t watching us while we made our school sandwiches we’d also take it for lunch! lol

such a fun Piñata! I reckon a lamington version could be good for Australia Day 🙂

That third photo down made me LOL. This is such a great DIY, and so colorful! I love it!! 🙂

0
Reply
heidi @ a week from thursday

I don’t know what I’d ever do with a fairy bread pinata, but this looks like SO much fun.

You have so many pinata tutorials. What do you do with them after you publish the post?

I’m totally in love with your skirt and shoes! Where are they from?
Kisses

Thanks!! The skirt is from Party Skirts and the shoes are from ASOS!

Arrghhhhh!!! Literally just lost my mind!! Yay – have seen so many Americans bag out fairy bread online, so I am super glad there are folks who can see our genius 😉 x from oz – Andrea

How many pompoms should i buy for the pinata?

Hi!! I desperately need to make this amazingness! Really struggling to find the tiny Pom poms though. Any links to online sellers?? Thank you x

First off, I am hoping I am not the first person to ask this, even though it seems like it would be something of importance to every bachelorette party.

Will you do a tutorial of how to make a penis shaped piñata? I am motivated to make one for my friend’s bachelorette party in August but lack the know-how. I’m assuming I would use similar materials and ultimately filling it with penis shaped confetti of course. Any who, if you have any ideas and want to share or even better provide a tutorial, all the girls in the world (who would love to embarrass their BFFs at their bachelorette party, like myself) would appreciate it!