If I were ever to throw a haunted house (and I won’t), this is probably about as scary as it would get. Glittered spiders, hanging from balloons on the ceiling! (I’ve told you before, I don’t like scary Halloween. Exhibit A.) These guys are the perfect touch of spook for a Halloween party, if you ask me, and would make an awesome addition to the entrance, or as a “chandelier” over a dessert table. The glitter is optional, but encouraged. Because really the only way spiders are acceptable is when they’re glittered, and hanging from balloons. Yes? Yes. 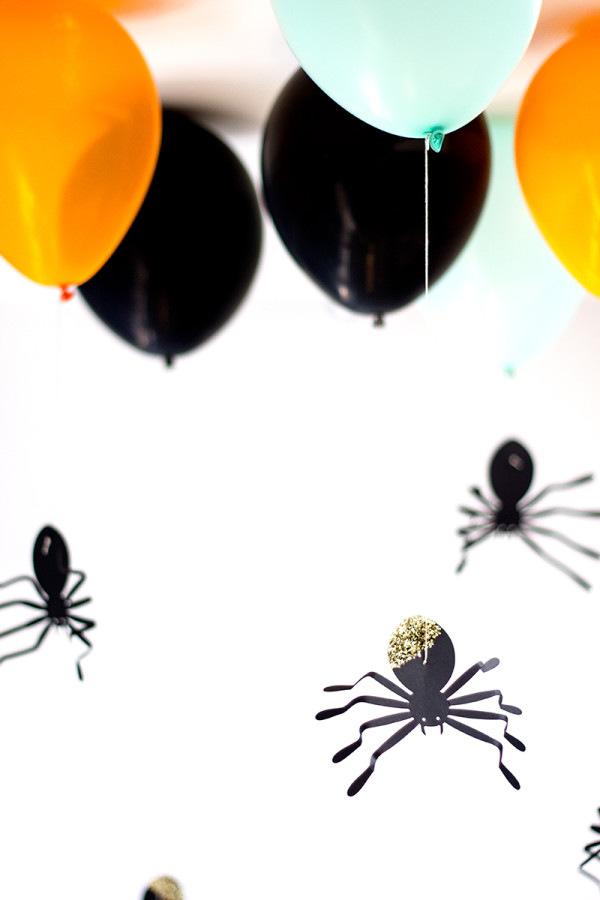 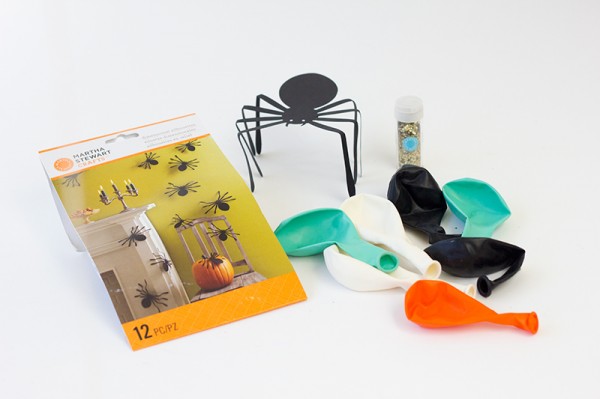 Glitter (Optional, of course! I used this gold leaf glitter

If you choose to glitter your spiders, brush decoupage glue on the part of the spider you want glittered. Then cover with your glitter and let dry. Cover again with a layer of glue to seal the glitter on there. (And let dry again!) 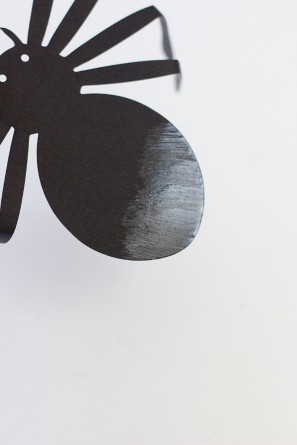 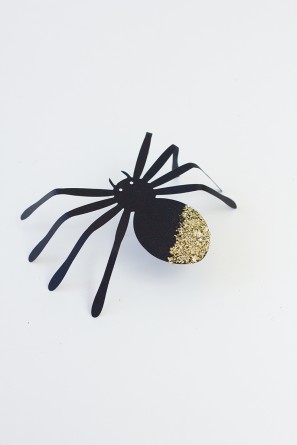 Poke a hole towards the back of the spider (if you want them to hang down like mine) using your awl. Slip the twine or string of your balloon through the hole and tie a knot. 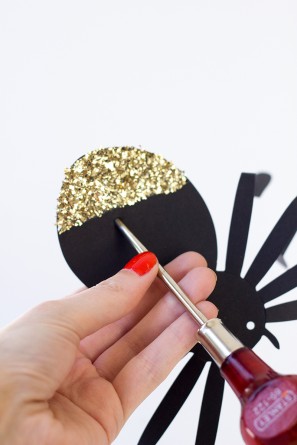 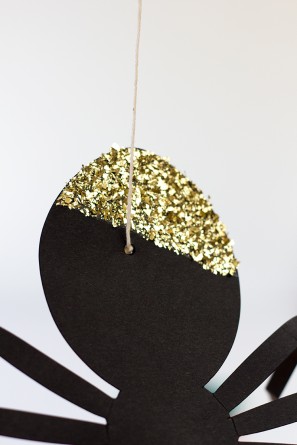 Let the balloons drift up to the ceiling and prepare to freak people out! 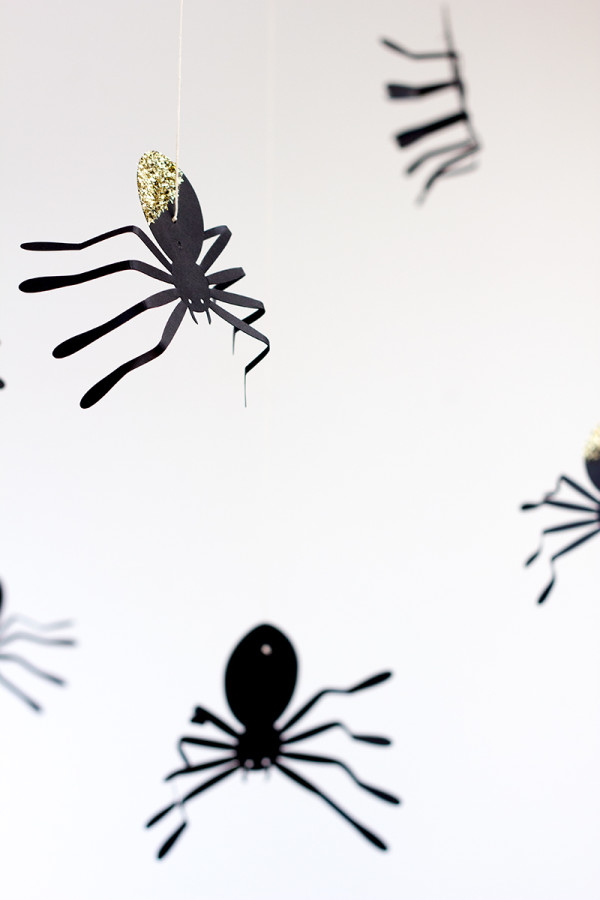 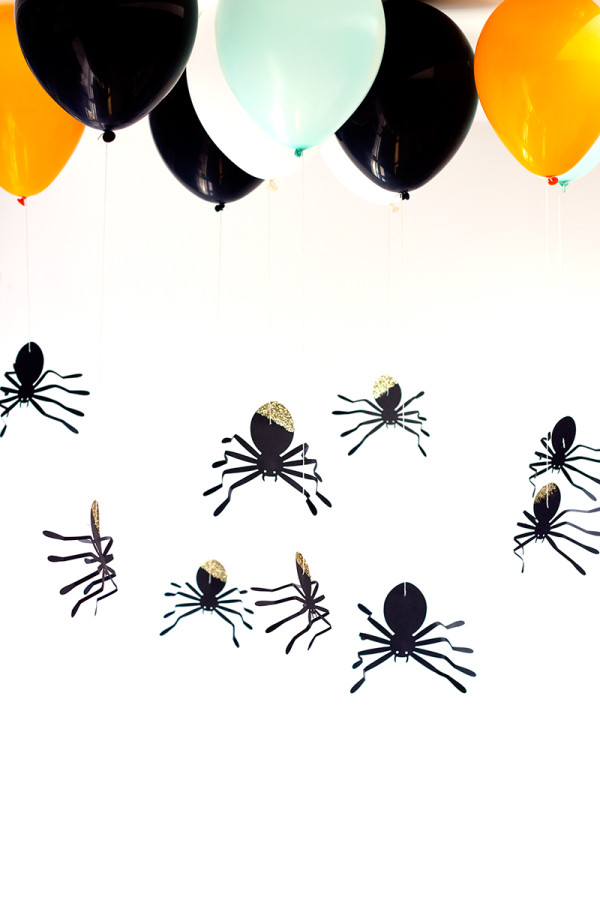 It was pretty funny (read: terrifying) when these guys began to fall from the ceiling hours later, like real spiders dropping down! Jeff and I both may have screamed. And Bella may have barked. Jeff will deny this. Regardless, I really want to to spider-balloon-bomb some place. How cool would that be!?

This post is a part of the 12 Months of Martha program, all content and opinions are that of my own.

I’ve been wondering what you were going to do with the balloons on your Instagram. These are so fun.

I don’t like “scary” Halloween either. I can forbid scary stuff right now and blame it on having little kids, but it’s really for me! Love the spiders- glitter makes everything better!

such a creative and fun way to make a party more spooky than scary 🙂 thanks for sharing!

I agree. Scary Halloween is for the birds. Great job! Love the colors!

Love this! This will terrify both boyfriend and our puppy. Maybe I should try making them. HA! They are so cute!

Sounds like you and I are both obsessed with mint today – love that color combo, make it fresh! My girls would love hanging spiders in the house for halloween xx

Cute idea, I think I’ll have to use it this year. Thanks!

This is adorable! Now I gotta throw a Halloween party!

I love this! My kids want to have a Halloween party this year, and I’m gonna try this project. My 6 year old will have the most fun with it 🙂 Thanks for sharing

This is so easy and interesting to make! Thank you very much for the idea and tutorial!!
Gonna do it to see how my sister freaks out of this spider 😀

You made some very nice focuses there. I kept an optical eye online for