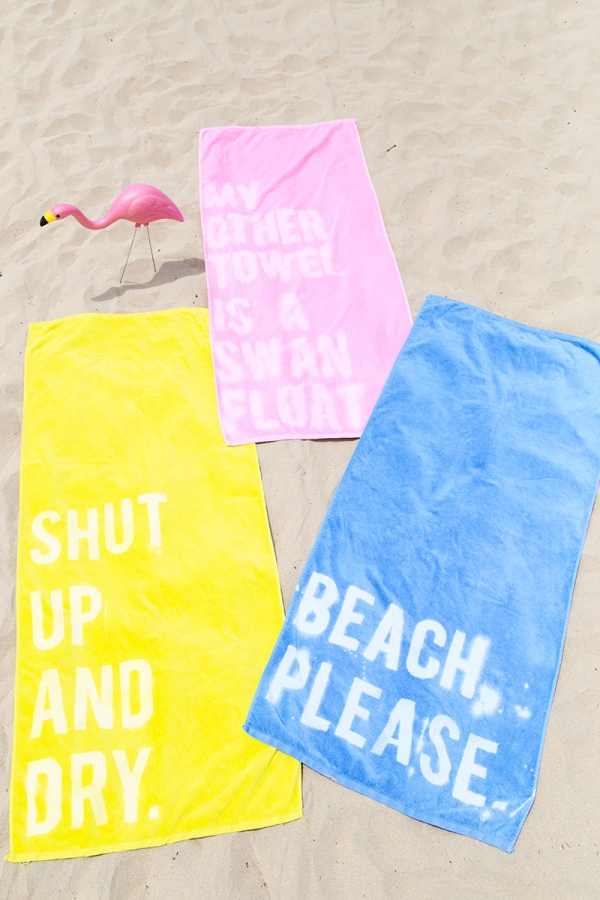 I’ve been trying to figure out how to make some DIY graphic beach towels forever. Paint isn’t an option, so what’s a girl to do? BLEACH! When I had the breakthrough, you couldn’t stop me. It was PUN IN THE SUN TIME! Coincidentally, Vaseline asked me to give their Intensive Care Spray Moisturizer a post-sun test run, so the team and I hit the beach with our towels in tow! You know, to make sure we could really gave the aloe in the lotion a TRUE test. (Twist my arm…any excuse for a beach day!) Verdict: the moisturizer and the beach towels both get FIVE STARS! So let’s make some, ok? 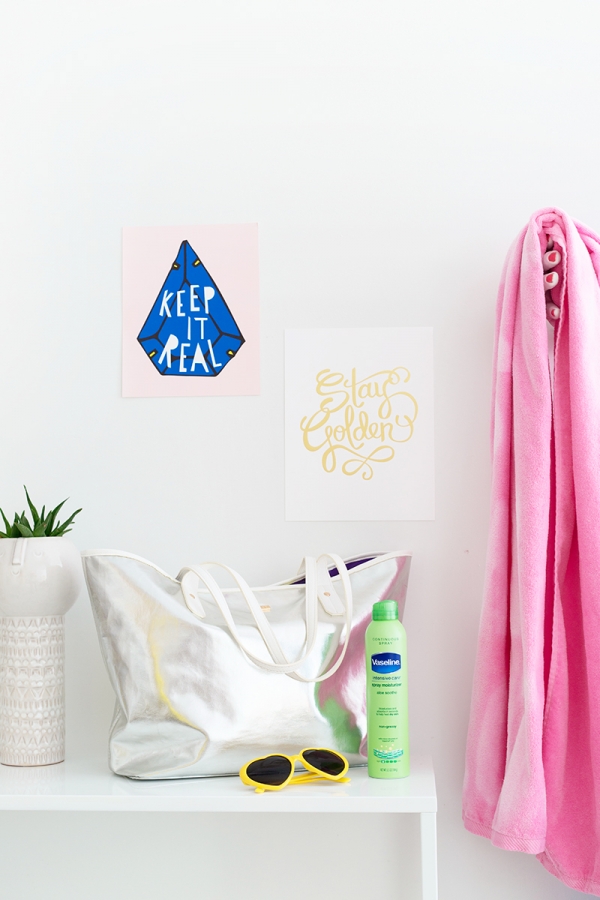 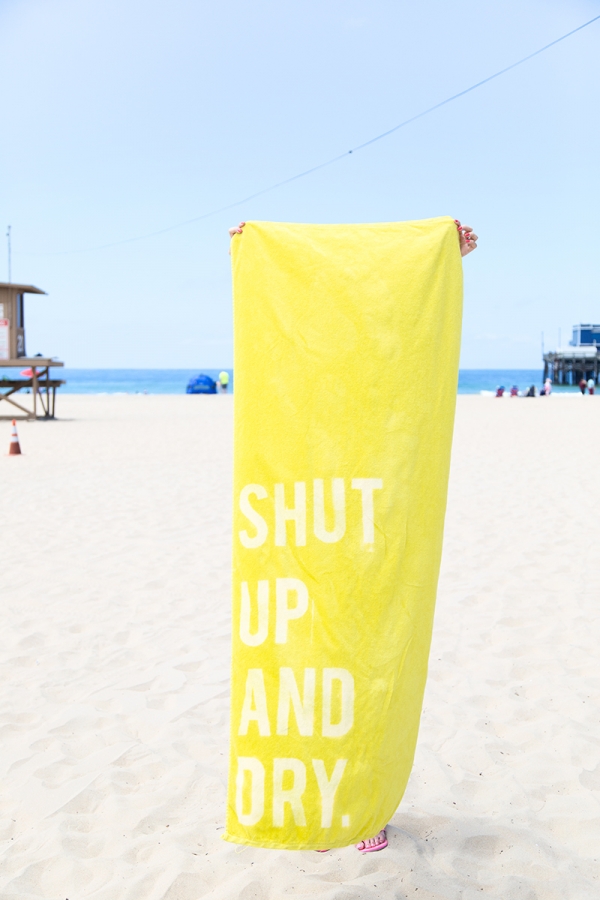 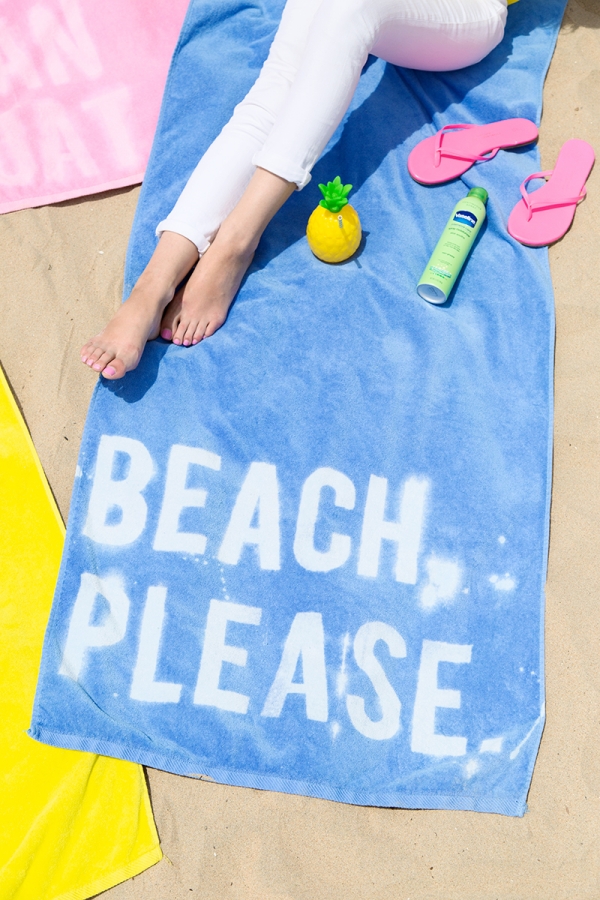 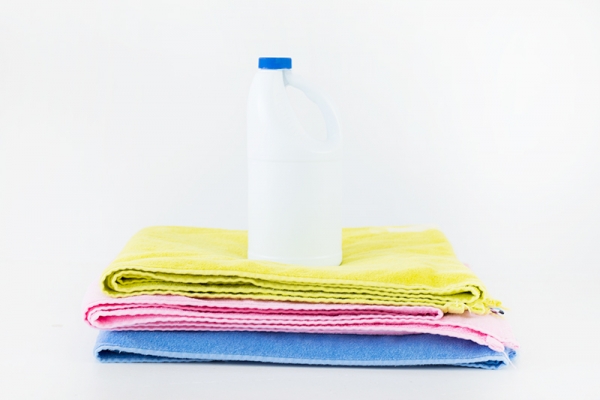 Beach Towels (I used these, I was really happy with the blue but the pink and yellow didn’t bleach as well as I had hoped. I would go with the brighter/richest colors you can find for the best bleach results.)
Bleach
Water
Spray Bottle
Gloves
Cardstock (one sheet for each letter)
Protective Cover for Surface and Beach Towel (I used scrap cardboard) 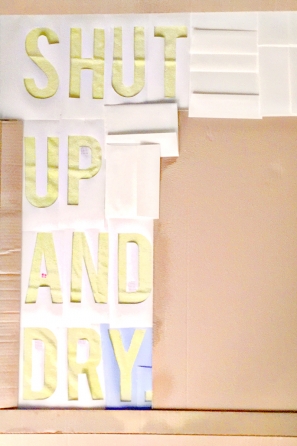 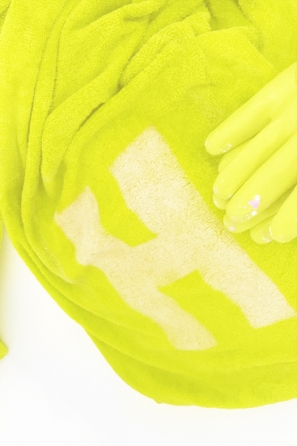 1. Decide what phrase you want to write on your towel. I typed out what I wanted in a large bold font (Bebas, size 500 or so) and printed out one letter per sheet of cardstock. Then cut out the letters to make a stencil being sure to save any “holes” from letters like D, A or O.
2. Mix a solution of half bleach and half water in your spray bottle. Lay out your towel in a well ventilated area on top of cardboard or another protective surface.
3. Cut down the cardstock around the letters so you can place each letter as close to the next as desired (see above) and line up your words on your towel. Cover all other exposed areas of the towel with scrap cardstock or cardboard. As you can see, on the blue one, I didn’t cover it as well and there was some bleach splatters. I actually kind of liked how it looked, so I kept it, but for a more clean look, cover EVERYTHING!
4. Put on rubber gloves and spray the bleach solution over the letters evenly and let the bleach do it’s thing for about 10-15 minutes or until the color is bleached to your liking. After that, still while wearing the gloves, remove the cardboard and stencils.
5. Bring the towel to a bathtub or laundry sink and rinse out the bleach really well under the water.
6. Finally throw the towel in the laundry and wash it (with detergent) and then dry it in the dryer. Tada! 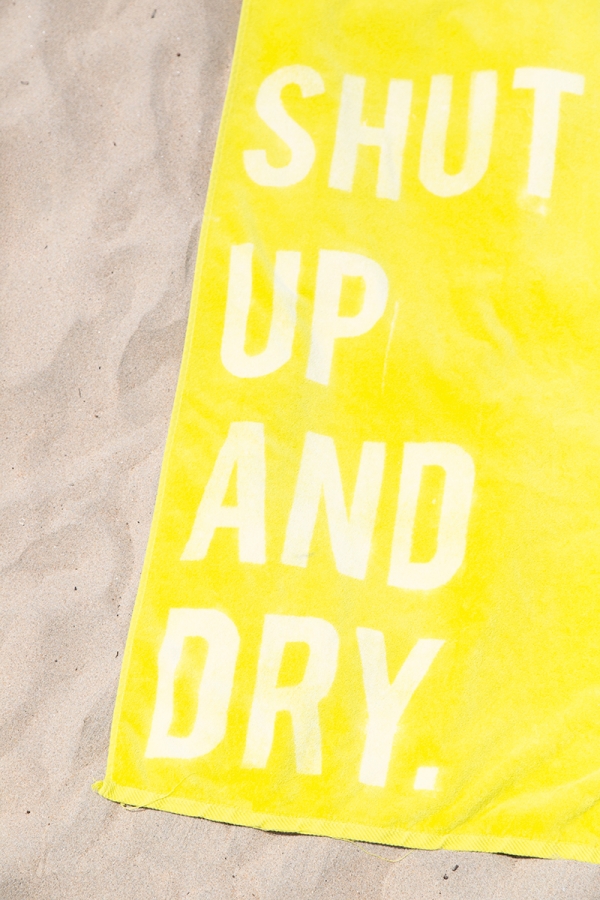 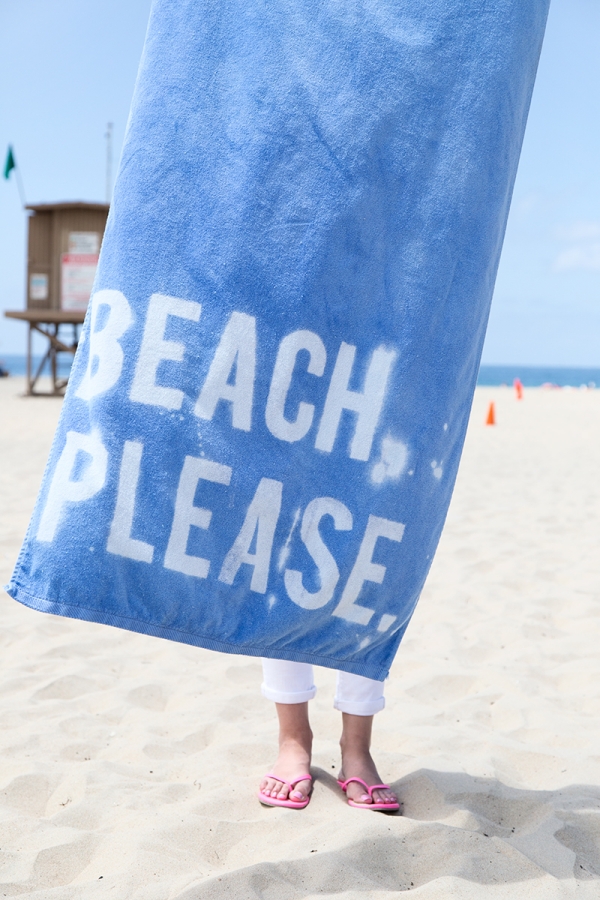 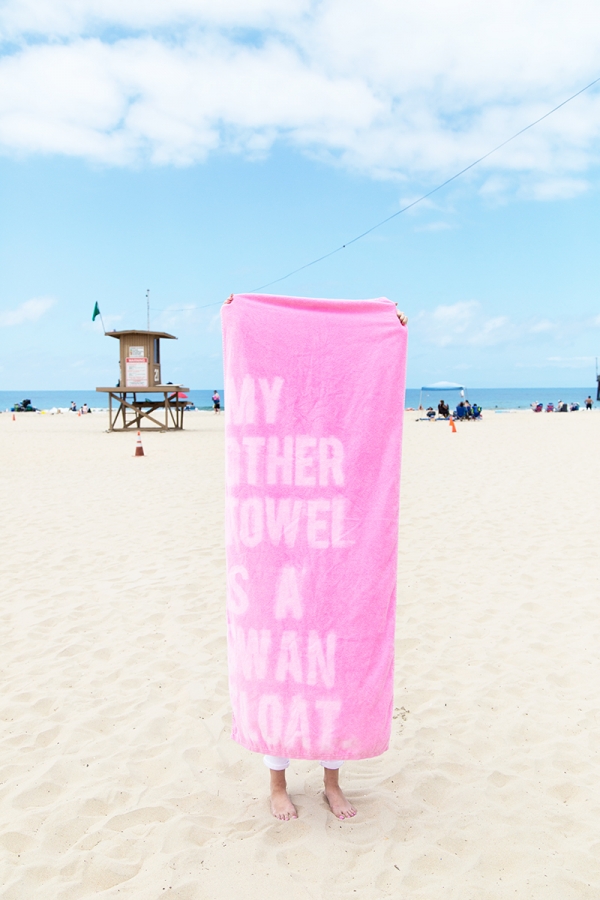 After we got back from our beach adventure I tested out the Intensive Care Spray Moisturizer since, well, this girl has pale dry skin and needs all the help she can get! Despite that, I’m sadly someone who is NOT a big moisturizer user ’cause I’m just really lazy, but I was really REALLY impressed. It went on SO easily, dried really quickly, and it. smelled. so. good. Like. WOW! Samantha has actually since swiped it from me to replace her daily lotion, she was THAT obsessed. And I quote, “I don’t dread shaving my legs anymore.” You’ve got some converts over here, Vaseline! 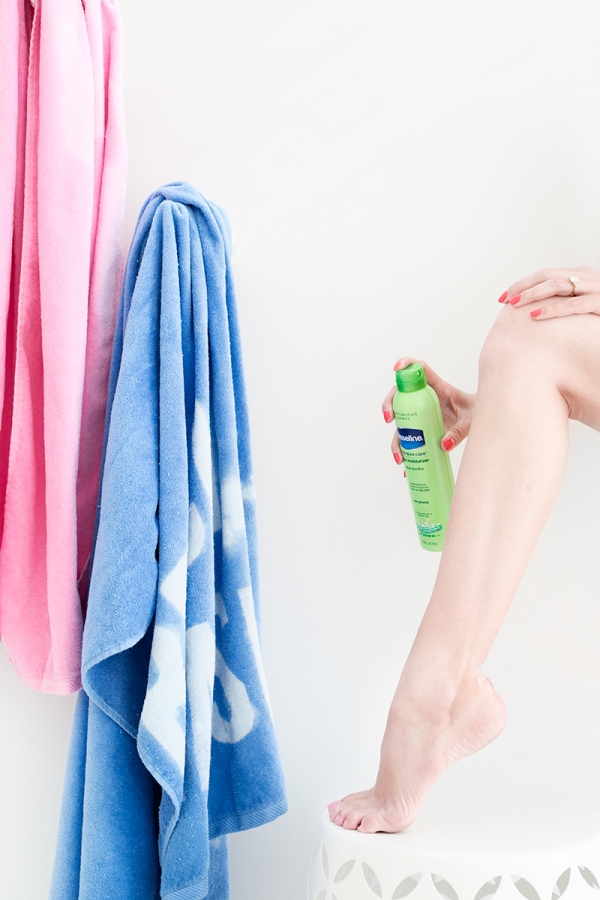 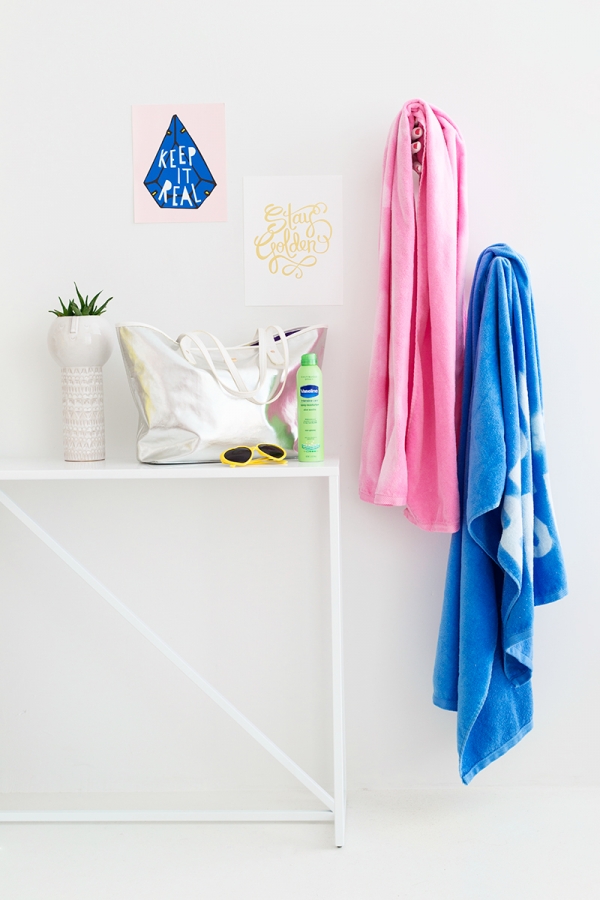 And now… GO GET YOUR BEACH ON, PEOPLE! Beach, please.

This is a sponsored conversation written by me on behalf of Vaseline. The opinions and text are all mine.

LOVE all your phrases! You are srsly like the Pun-Master. Mistress. Pun-stress? Sounds like you stress over puns. Which you clearly don’t. This isn’t working at all…

I love vaseline. I found out about it many many years ago, and now I still despise body lotions but use vaseline on any occasion. Workds wonders as an after-sun cream as well. I even managed to convert some guy-guys to faithful followers, imagine that!

I believe it! We were seriously floored by how awesome it was. I’m jealous you’ve known about this magical product for so long!!! 😉

SO GOOD! I would have never thought to bleach a beach towel, but now that’s all I want to do. Well that and take the day off and actually be on the beach 🙂

Right!? I want to bleach EVERYTHING now! Ha!!

This is such a great idea! I absolutely love these beachtowels. And you always pick AMAZING quotes!

The swan float towel is GENIUS! So funny

So clever! I would never have thought of using bleach! I actually think the yellow looks pretty awesome but that blue towel really pops! Hannah
http://crafternooncabaretclub.com

You had a wow from me. Never thought of “writing” on towels. It’t not too complicated but I still think I wouldn’t give it a try. I’f afraid of spoiling it.

SHUT UP AND DRY. hahahahhahaha. KILLS me.

These are superb!! Cannot wait to give this DIY a try. Thank you for sharing and love your puns 😉 X

Those are sooo cool! Thanks for sharing!
Cheers,
P&F
http://preppyandfunny.wordpress.com

Wow! This DIY is really original! Love it! I’ll try to do with any old towel 😀

LOVE THIS IDEA need to get on these and make a ton for next summer so quick, adorable, and creative!

LOVE! Thank you for sharing!! Now, could you please tell me where you got the pineapple cup!?! Pretty please?! =)

Long time looking for Beach towels with some kind of graphics and finally got my wordings. 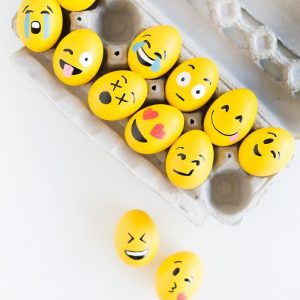