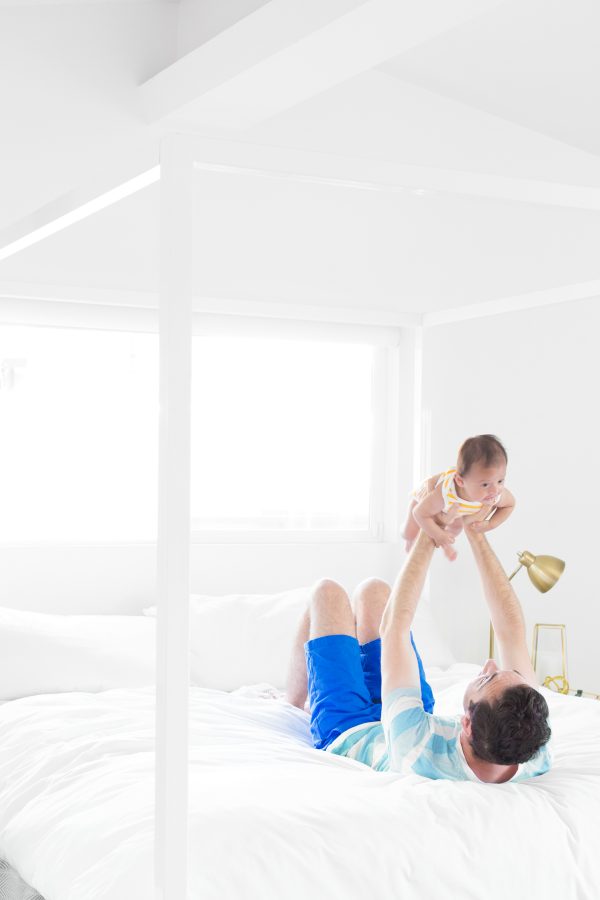 Happy Father’s Day to all those dads, father figures and soon-to-be or hoping-to-be dads! I think the only thing more awesome than becoming a Mom has been watching Jeff become a dad. Just as badly as I wanted to be a mom, he wanted to be a dad. From day one. And getting to witness him fulfill that dream has been truly amazing.

I say this often, but it’s not common to find a high school guy who is just as interested in talking about becoming a parent as you are. Who will start naming his children with you at the age of 18 and who will stick around when you say, “I want at least four kids, you on board?” Nevermind one who so open-mindedly in college, when I started talking to him about how we may need to start our family in a non-traditional way, just said “I just want to be a dad, no matter how it happens.” And then one who remained my rock as we fought through multiple avenues to find our path.

I could talk all day about Jeff and his new role, but I thought it would be fun have Jeff pop by and share his thoughts on becoming a dad, from his own perspective. I mean, you guys totally like him better than me anyway right!? 😉 And we’ve teamed up with Pampers today which is ironic, seeing as changing Arlo’s diaper has quickly become Jeff’s favorite thing in the entire world. (And yes, we do use Pampers! Swaddlers, size 1 to be specific. Ha!) In fact, whenever I change Arlo’s diaper, 99% of the time Jeff is right there next to me because he just cannot get enough of this baby of ours. Who happens to be particularly giggly whilst laying on a changing table. It was easy to imagine what a great, involved, all-in dad Jeff would be but to see it actually happen has been more  special than I ever imagined. And I remind myself every day not to take it for granted. Without further ado, take it away, Jeff! 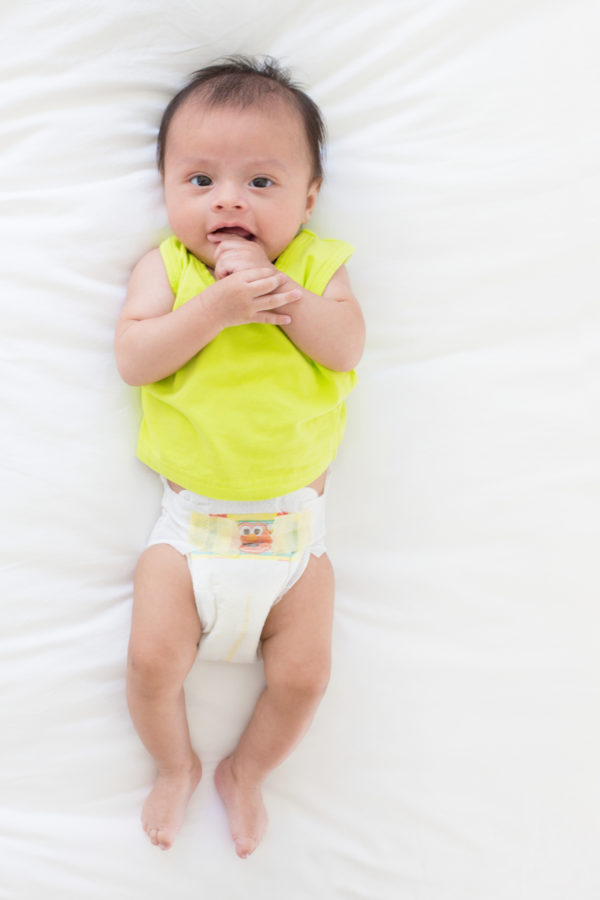 Good morning, SDIY fam! I gotta say, writing out a blog post is a first for me, but I feel like I know and love you guys already so let’s give this a whirl, shall we?

Long story short, when I became a dad, I became the best version of myself. I felt whole and I felt responsible and my relationships all changed for the better. There was now some little one out there in the world who looked up to ME for guidance and love and opportunities and mostly importantly, tiny well-thought-out outfits. (It’s always been a dream of mine to have a son in miniature streetwear and/or a three-piece suit. Lifetime amounts of love and gratitude, fine, but really we’re all here for the tiny cuffed denim).

At this point at my life, I feel like I’ve had years of training. Mostly kidding. We have no clue what we are doing. At least twice a day, one of us jumps up to make sure he’s still in his bassinet during nap time.

BUT growing up, I was a camp counselor back home in NJ. There were summers where I was responsible for 18-25 screaming five-year-olds at a time. So from an early age, I think I was exposed to the responsibility, the chaos, the camaraderie, all of it. I met Kelly when we were 18 and she shared the same affinity for parenthood. Now that we’ve been together for like 10 years (Babe, it’s been 10 right? 11? Feel free to leave me.), and started our parenthood journey, I do think we complement each other pretty well. 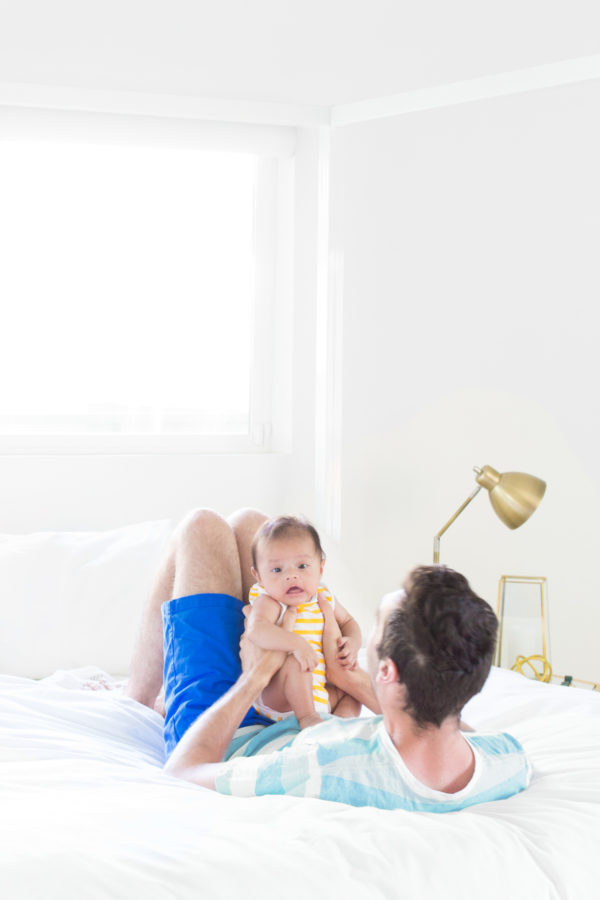 I love waking him up in the morning. I unzip his little swaddle and he reaches so high to the sky for that big morning stretch. I change his diaper and he smiles so big and giggles and, how can you ever have a bad day when it starts off like that? I love how bashful and excited he gets looking at his own reflection in the mirror. I love going for walks with him on my chest and how good his head smells after a bath. He’s just so weirdly angelic and we couldn’t have asked for a better blessing of a child.

I also love that Arlo is going to grow up in a hyper-creative environment. This weird, colorful world that Kelly and I have created for ourselves professionally will no doubt spill over into his personal development and upbringing and we both love that so much. We’re also the type of people who don’t plan on pushing him in one direction or another in terms of hobbies, activities, etc. As long as he tries things at least once and is kind to other people, that is a huge win in my book 🙂

It’s only been three months, but I already love my son more than words can possibly describe. He is constantly surrounded by people that love him and are rooting for him and only have his absolute best interest in mind. As I sit here writing this out, he’s on the floor across from me kicking and smiling and singing along to his little jungle gym play situation and has no idea just how bright his future is. That’s what warms my heart the most. We already have the MOST fun life and it’s only become infinitely better with him in it. So, so many adventures ahead, kid! 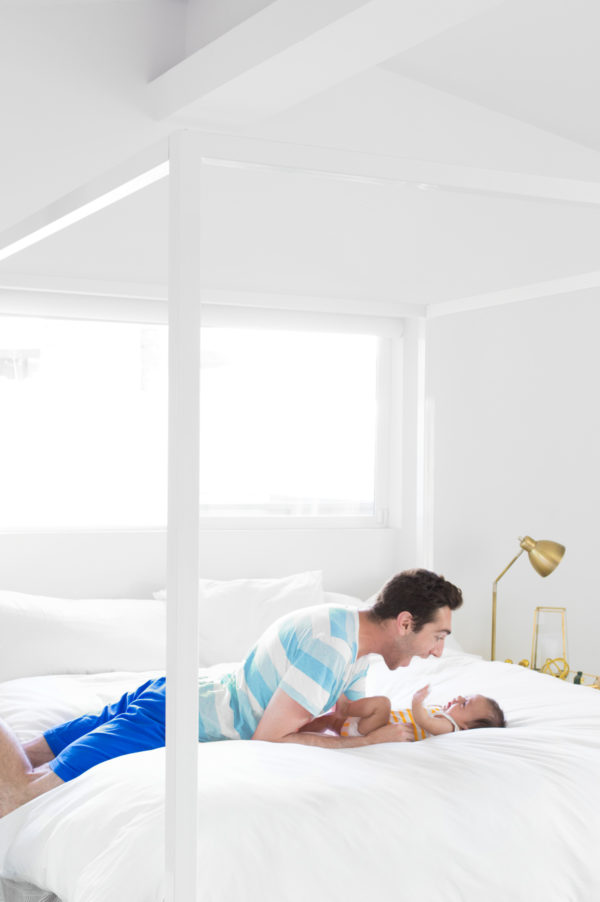 K so how’d I do? I’ll probably stick to capturing all the content for the brand going forward, but I really appreciate you guys letting me step in today. To all the other dads out there (brand new or otherwise), Happy Father’s Day!!

This post was created in partnership with Pampers. All content and opinions are that of my own! Thank you for supporting the sponsors that keep the Studio DIY party going! Read more about my editorial policies here. 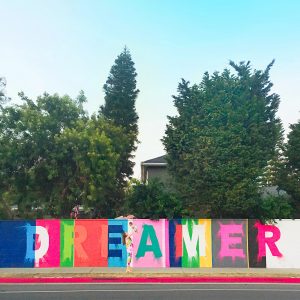