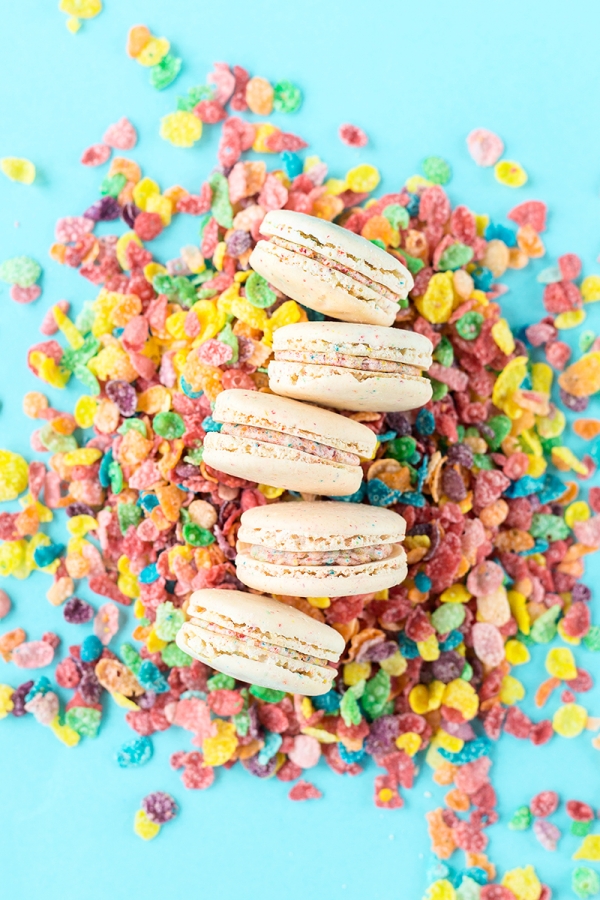 We like a good macaron here at Studio DIY. I mean, we like the usual pistachio, rose, strawberry flavors… but Studio DIY is really more about the crazy wacky “my five year old self would lose her MIND over this” kind of flavors, right? Well, meet Dana’s Bakery everyone. The Studio DIY of macarons, taking all the flavors of your childhood and making them into macarons!!! It’s like you’re being fancy but it TASTES SO MUCH BETTER THAN FANCY EVER WILL!

After we taste tested some of their macs (Ehm.. the cookie dough, birthday cake, pb&j and s’mores) we asked if they’d share a recipe for our ultimate macaron dreams… their macaron that tastes just like fruity pebbles! And they agreed!!!! So let’s put on our fancy pants and go on a macaron making adventure together! 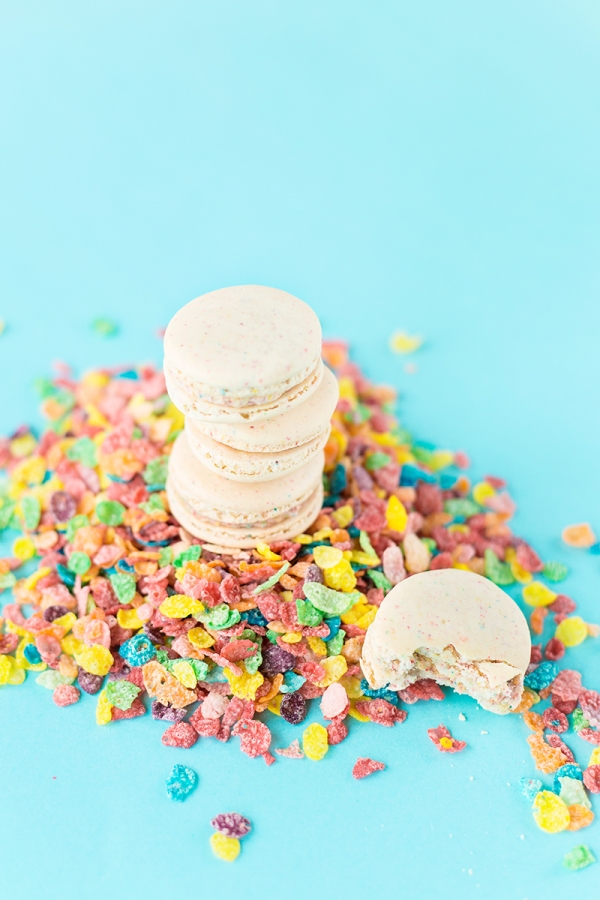 1. Preheat the oven to 325oF. Pulse almond flour, salt and confectioners’ sugar in the bowl of a food processor 8 times for 8 seconds each time. Sift to remove any additional lumps.
2. Whip the egg whites in an electric mixer bowl with the granulated sugar, cream of tartar and (preferably aged and room temp!) egg whites, on medium-high speed until glossy stiff peaks form (approx.. 4-6 minutes depending on mixer speed).
3. Fold the dry ingredients into the meringue until you reach the unique macaronnage stage. Fold to combine but be careful not to overmix. If there are still swirls of color it is ok! As you pipe it will combine further, and if you are lucky you will get some tye-dye swirls which always looks cool.
TIP: It is important to fold the different components just enough, but not too much or the macarons will crack. To make sure that you have reached the right point, once the ingredients appear combined, lift a large portion of the mixture about 6 inch above the bowl with the spatula. When falling if it breaks or appears , continue to fold. When folded just enough, the mixture should fall right back into the bowl, with no stiffness, in one continuous drip. It should also flatter once in the bowl.
4. Pipe the macarons into 2 inch circles. Circles should be 1 1⁄2 inches apart on a Parchment or Dana’s Bakery silicon baking sheet. Once you are done piping – slam the baking sheet down to remove excess air (slam 8 times, from 6”-8” above the table). Sprinkle a small amount of your favorite ground cereal onto the tops of the macarons.
TIP: Too much cereal on the top will cause shells to crack in the oven, so just enough (around 1/4th a tsp)
5. Let macarons sit to get a skin for 15-30 minutes. Bake for 15 minutes, until the macarons just come off the baking sheet when you lift them (the centers will have risen, and will not have any dark indentations).
6. Cool completely before removing and filling.
7. For the buttercream, whip the egg whites, cream of tartar to soft peak. Bring the sugar and ¼ cup (57 grams) water to a boil in a small saucepan, and cook syrup to 238°F (115°C). Gradually pour the syrup down the side of the bowl, cool on medium speed about 8 minutes.
8. Add in the salt, butter and whip on high speed until fluffy and emulsified, about 10 minutes. Add ground cereal (to taste). 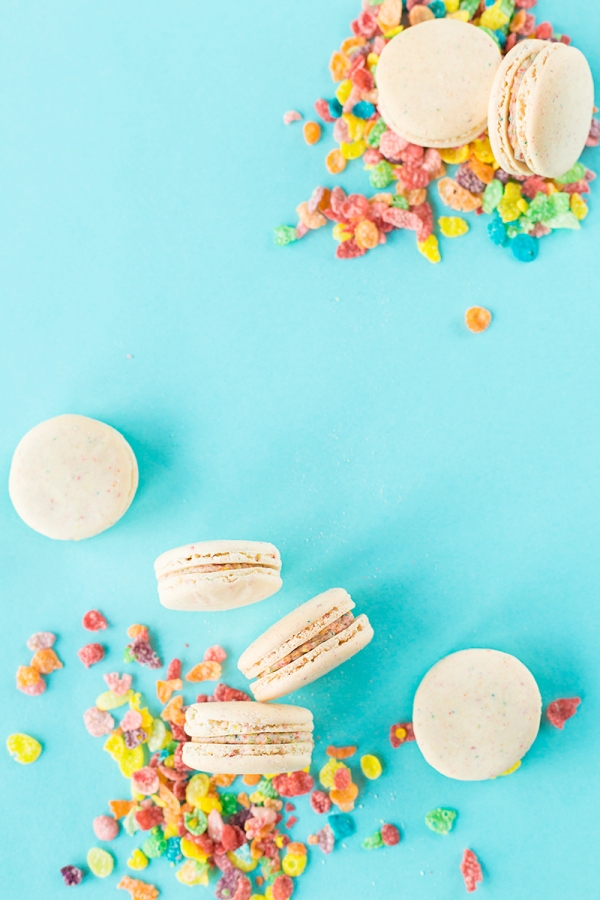 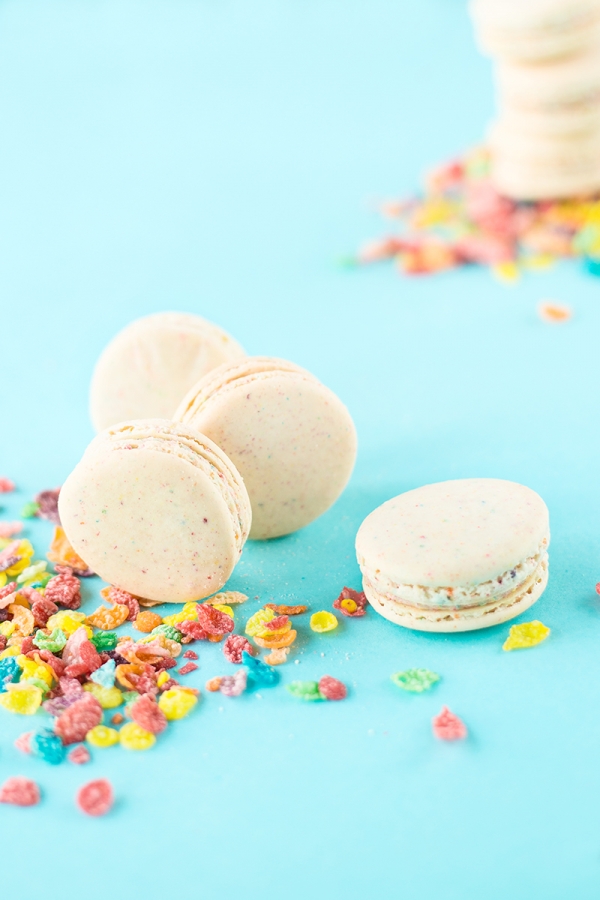 If you’re into the idea of macarons but overwhelmed by everything required, Dana’s Bakery also sells a kit for making these guys too! Go make (ehm, eat) some macarons, guys!!! They also ship their macs all over the country and they’d make a great gift. And I’m not saying that because I’m supposed to, I’m saying that because the entire team went B-A-N-A-N-A-S over the flavors and basically I’m just helping you all be the best friends/boyfriends/girlfriends/parents ever with this knowledge. Happy macaron-ing!