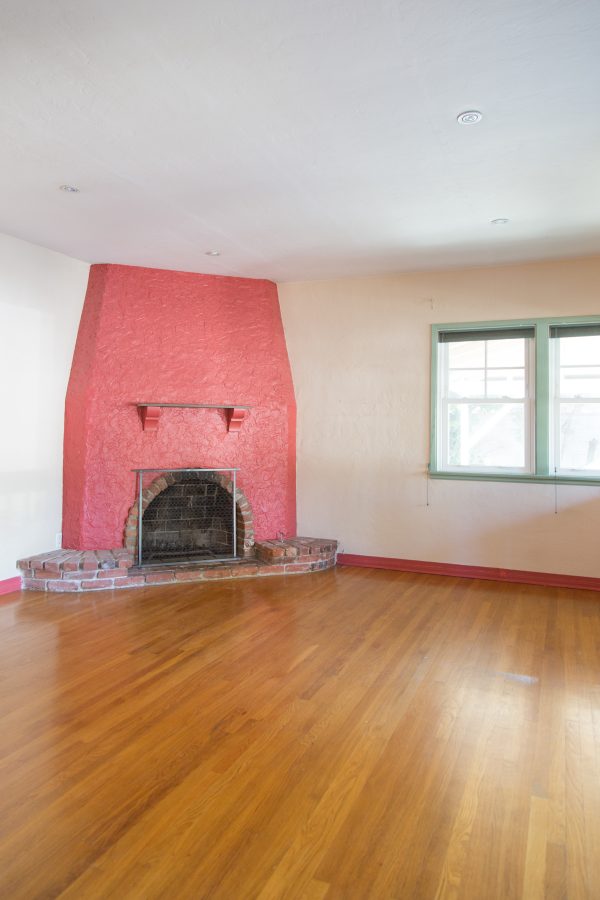 It’s before photo time!!!!!! First of all, if you missed it… we bought a house! Second of all, as we start to dive into each room we’ll be doing a more in-depth post with inspo and additional photos but I thought it would be fun today to share a little peek at what we’re working with!

We feel really lucky to have found a house that is in pretty good condition and mostly just needs some major updating, not a ton of renovating. Character was our number one priority and it has a lot of that with original floors, molding and those arches!! That said, a lot of the house feels very pieced together… like there are random doors and weird walls and additions everywhere where you’re just like… huh? Ha! Anyway, I’ll take you really quickly through some of our initial thoughts and plans and you can also see it live on Instagram later today!! (More on that below) 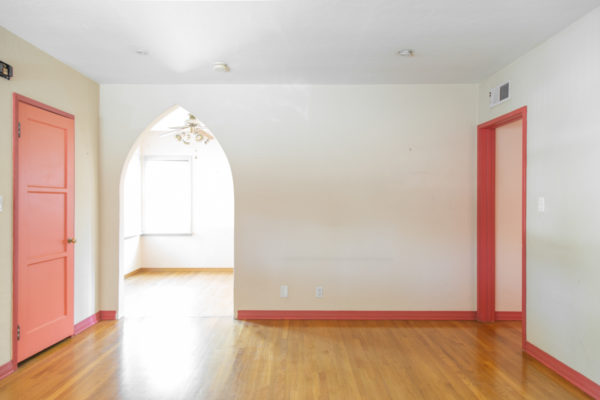 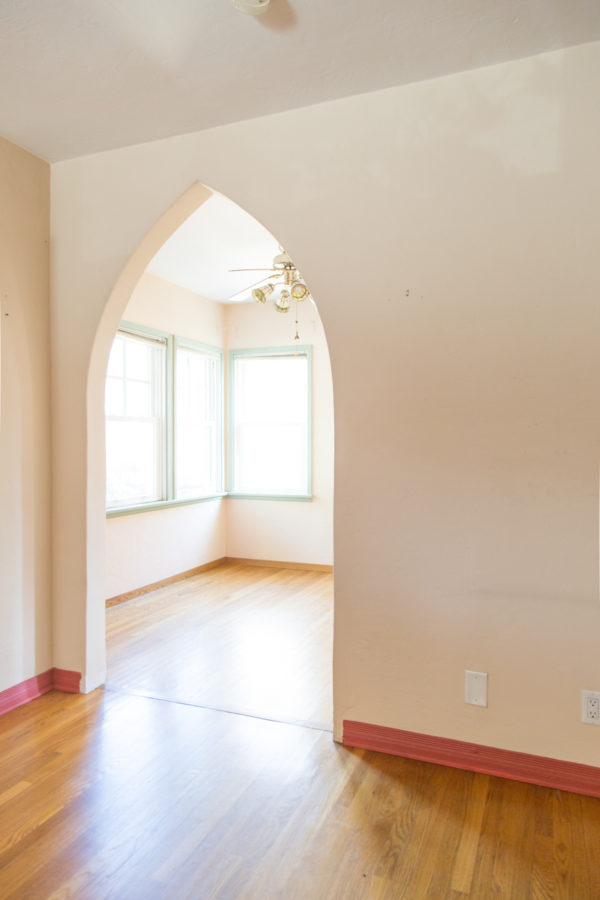 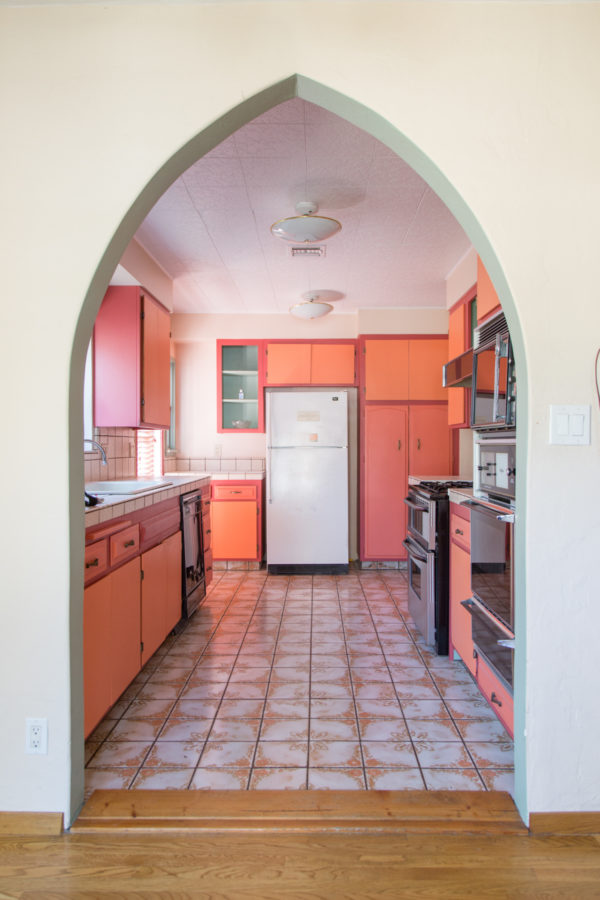 Above you see the living room, dining room and kitchen. The living and dining rooms are tiny. Like we have to get rid of our current couch and table because they don’t even fit in the rooms, tiny! Off of the dining room and behind that wall next to the arch is the kitchen. I feel like a lot of you are going to love how wacky the kitchen is. I love it too! But not enough to live with it every day. So this is one of the rooms we will be renovating from top to bottom.

We’ve been chatting with a contractor about a way to open up the kitchen to the living room without losing the arches and have a few exciting ideas for doing so. Once we get to that point, I’ll give ya some details on our thoughts there! We feel like opening it would make the smaller living spaces feel a lot bigger, bring in more light and make it more practical with babies in the house! 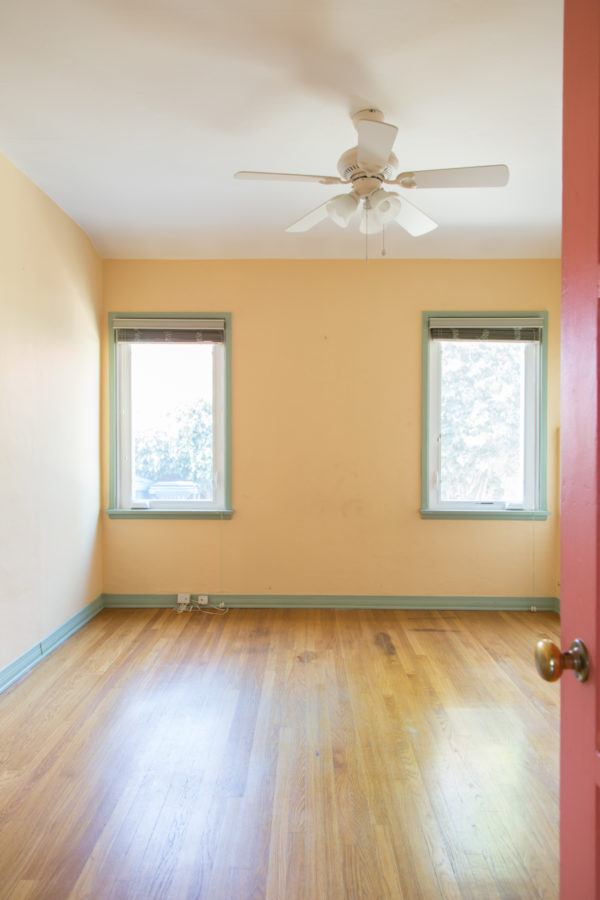 Up there is a peek at Arlo’s room!! There are three bedrooms in the house and this one is the smallest, but also the coziest. It has this amazing ledge (that you can’t see here) that we’re hoping to turn into a gallery-ledge of sorts! His room is up first in our makeover plans, so I’ll be sharing more details about his room soon! 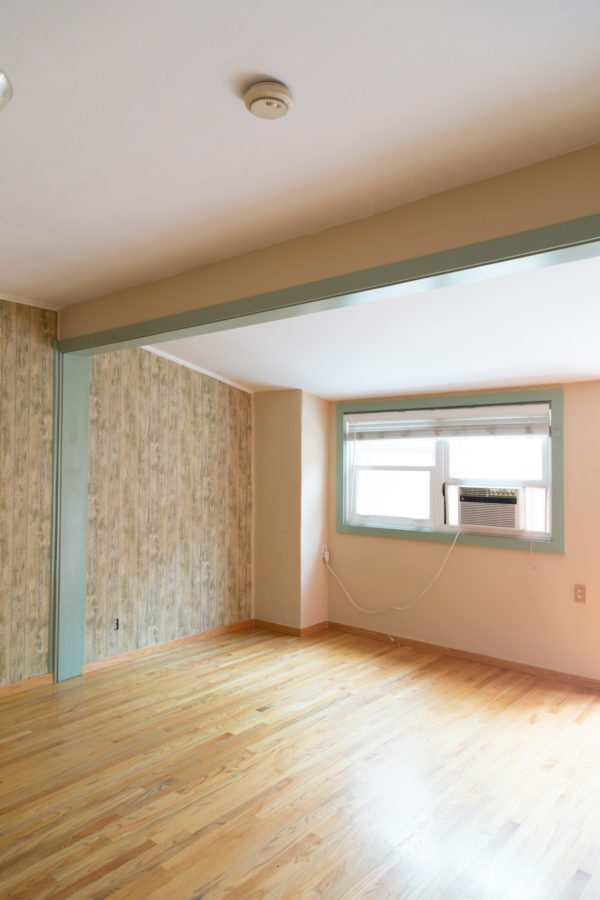 This is our second bedroom! We were originally going to use this as our master and turn the master (which you’ll see below) into our family room, but since we hope to adopt again in the near future, it seemed silly to eliminate a bedroom. So for now this well be a guest room/office and eventually it will be another kids room. 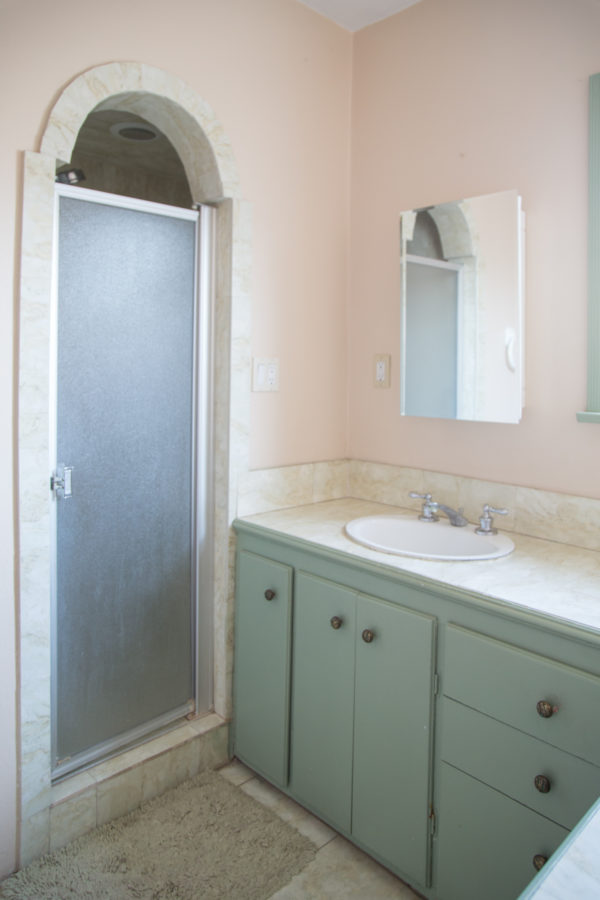 The bathroom above is the kids/guest bathroom. I actually love the shower, if we re-tiled it, because of the arch haha but there’s currently no room for a bath tub and with babes, we gotta have one. So, this bathroom will also be getting a full overhaul! 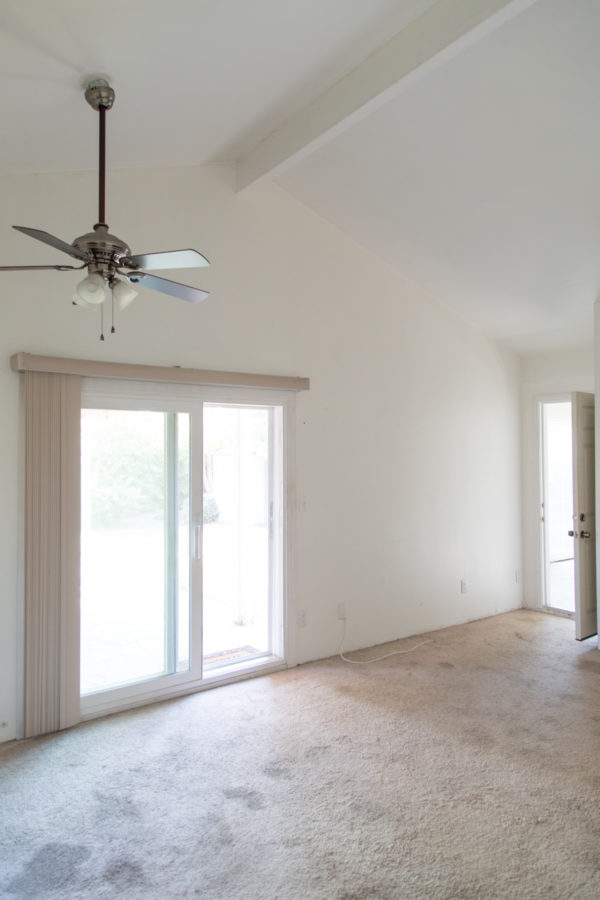 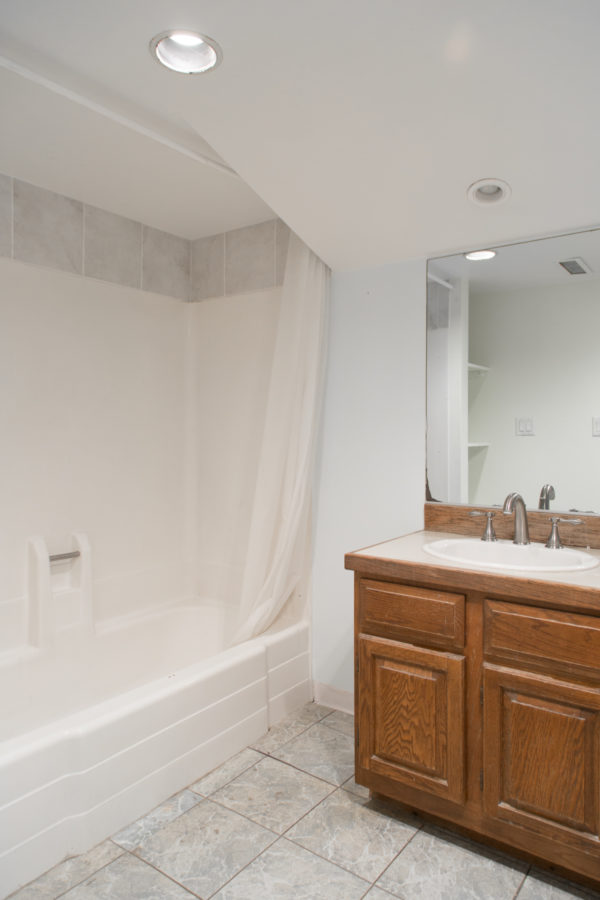 Ok! Above is our super weird master suite! This entire area was an addition to the house which you can tell because it looks it. Ha! It was actually used as a separate rental by previous owners which is why there is a kitchenette in it!

Personally, I’m a pretty big believer in not having a big master bedroom since I feel like bedrooms should only be for sleeping. (Jeff and I differ a lot here!) So I’ve really struggled with making the biggest room in our house the master. I wanted this to be the family room mostly because of the high ceilings so I could have my giant christmas tree! Haha!!! But with the layout of our house and our plans to grow this family, it just made sense to do it this way. ANYWAY! That was a tangent. We’ve already taken out that horrifying carpet and the master bathroom needs a full overhaul. (Jeff made it look decent here but it’s pretty gross, in real life!) We’ll also be removing the kitchenette to turn that little room into a laundry room/closet. REAL excited about that. Say it with me… SHOE. CLOSET. 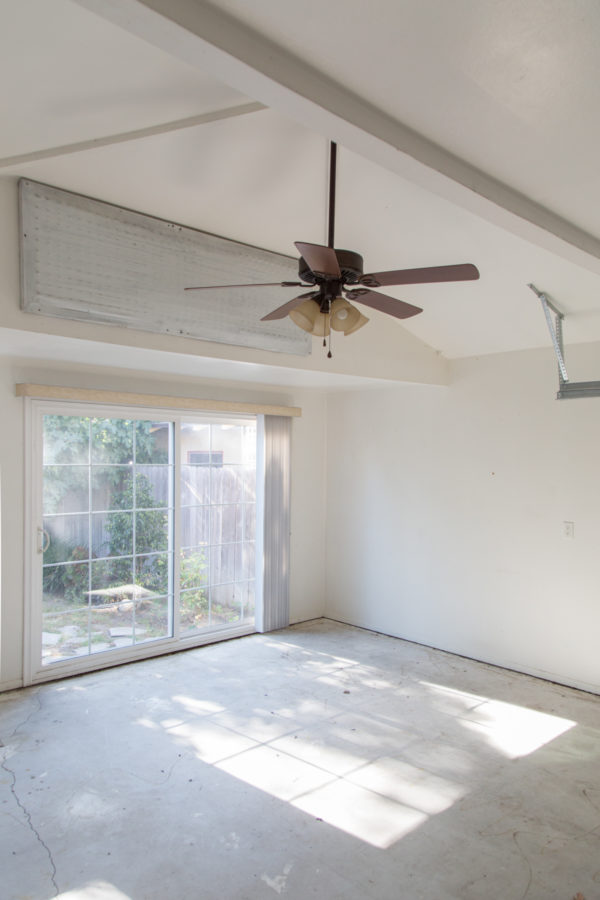 And this is our garage!!! It’s already partly finished which we are THRILLED about!! It’s off the master, which is super weird, but we are planning to turn it into a playroom… we think. It may also have to serve as a guest bedroom at some point but with the living room being TINY we really need a place where the kids can have space to spread out and be messy so it’ll probably be both eventually!

We’re also going to divide part of it off to be storage. The idea of having storage is so foreign to us since our apartment has a total of 1 closet right now. What a dream. 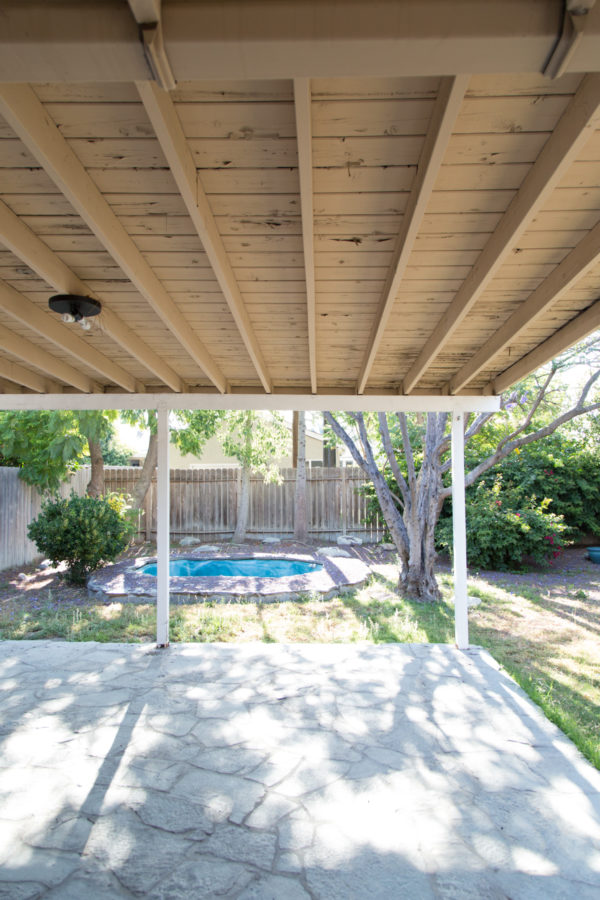 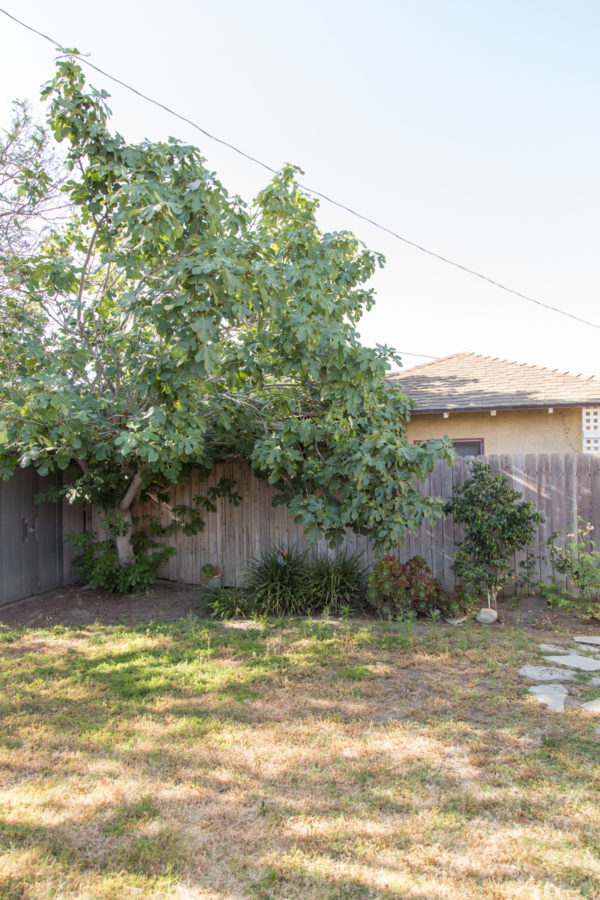 This is just a peek at our yard! WE HAVE A YARD! FYI, that’s not a pool. It’s a gigantic (12 person?) hot tub that doesn’t work. It’s also a death trap for our soon-to-be running child. So, we’ll be removing it! We have BIG dreams for this yard since with LA weather, we can spend time in it year round. We’re hoping to replace the pergola, remove the spa, add an outdoor kitchen (with a pizza oven!?!?), put in a fire pit and keep at least half of it grassy for kids to just run amok in. Oh man, I’m the most excited about this. The idea of being able to go outside is SO exciting!!!!!!

And that’s the spark-notes version of our little house! Next up, we’ll share our overall design and color-scheme plans for the home. And then we’ll start diving into rooms!! EEP!!

Remember!! We’ll be doing a LIVE walk-through of the house on my Instagram so you can hear a few more of our thoughts and see the space today at 2:30pm PST! Be sure to tune into that!!!

Home » Life » Style » The Mindwelling: ‘Before’ Photos of Our House!!

I love seeing the before and after of renovation projects. I’m so excited to see what the final result of the house will be! It would be awesome if you did separate posts for the different room renos.

Oh, I almost forgot, congrats on the new house!

Thanks Maria!! Yes, we’ll be doing an inspiration post and a reveal post (and maybe more) for each room so you’ll get to see more angles and more side-by-side before and afters! Eep!!!

I love it already! That house has so much potential, and I love all of the shapes of the doorways and even the arch in that shower!

0
Reply
Kelly
Author
Reply to  Lauren @ Oh Hey! I Like That!

So much potential, right!? The doorways are my absolute fave!!

I LOVE THIS HOUSE! I can see what you mean about the wonky layout, but there’s just so much good light and character. Can’t wait to see the Instagram sneak peak. You guys scored!!

Thanks Megan!! Yes, what it lacks in good layout it makes up for in character!! Can’t wait for the IG live!!

Oh my gosh! I love this space! I can’t wait to see how you guys make it your own!

Thanks Paige! So excited to share this journey here!!

Ahhhh! So exciting. I have no mind for this kind of stuff, so I’m sure I’ll be blown away by everything you do.

BTW–once you get moved in, can you do something on a way to store clutches? LOL! #cantclutchthis

Really, though… I am struggling in my life with the best way to easily store my clutches and handbags (with minimal storage). I like to see them, so I don’t forget my options, but I just don’t know how to do that. :’)

Ooooh yes that would be so fun!! Haha! We have some exciting closet plans, I can’t wait to share!!

I’m definitely going to pin some of these before photos for inspiration -I love the coral baseboards and mint accents (window and arch)with the neutral wall! I can’t wait until my partner and I can buy and renovate a house of our own.

This is awesome!!!! What neighborhood did you end up settling on?

So wait why do you want to take the tiny stove out of your master? Do you not love the idea of baking cookies while you’re in bed? I mean I know you think bedrooms are just for sleeping but….

It is adorable and has charm written all over it. Congrats

Oh my word! I can’t believe you’re saying the living room and dining room are tiny. I think both those rooms combined are as big as my Brooklyn apartment – ha! The house looks beautiful and spacious with so much potential. Can’t wait to see what you guys do to it!

OMG it’s perfect for you guys. All the little details make it so unique and I’m sure you’ll make it a colorful Cali paradise! Good luck, super excited to follow along on this adventure <3

I think you could definitely knock down the wall between the living and dining rooms and open them up into a big open concept living area. I know the arch is something you really love, but you could make the opening a larger arch? I think opening the space up would outweigh the arch detail, though, in what you would gain from functionality and light and space.

So happy for you both! Congrats and can’t wait to follow along with the renovations!

i think the most exciting thing about all of this is that you’re looking to give arlo a sibling and that’s pretty amazing!!!

i can’t wait to see the updates that you all do to this home!

a million more congratulations!!!!!
couldn’t have happened to a more deserving couple.

can’t wait to see a replay of the live story since i was at work!!!

Yeah girl!! We hope to give him many siblings! =)

Loved seeing your live feed! However curious what the outside looks like from the street. Looking forward to seeing how you transform the house to make it your own!

This place really looks like it has a lot of potential, and I am so curious as to what you will do with that fireplace!
https://www.makeandmess.com/

So amazing, congratulations! I’ve been following since your blog had the old look. 🙈🙊 Also, I’m interesting in your couch and dining table! Lol. Will you be listing it??

Love seeing your house — I can’t wait to see what ya’ll do with it! So happy for you!

omg I LOVE that Fireplace!! I cannot wait to see what you do with the place! I live in Ireland and it gets pretty cold so having arch ways and open plan isn’t really an option so I am definitely green with envy.

Wishing you and your family the very best in this gorgeous home xo.

where are the afters???